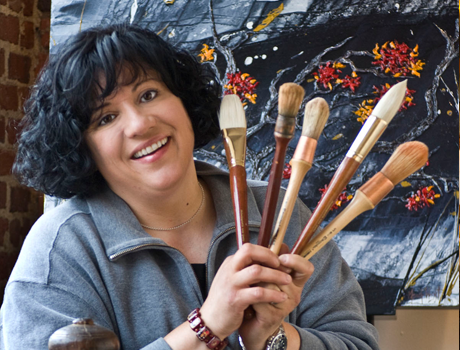 Globetrotting artist settles in Denver. Carla Wright, artist and gallery owner, trotted the globe before bringing her talents to the Mile High City. The road, long and winding, was replete with experiences and people, both of which led to insights that she has applied to her work. Now established in her gallery in the heart of the official Santa Fe Art District, surrounded by colleagues who are friends as well as artists, Wright discusses her life and how it has brought her to this point. Her gallery, the Carla Wright Gallery at 870 Santa Fe, features a varied and versatile stock from a number of artists, ranging from traditional landscapes to abstracts, metal, surrealism, sculptures and jewelry. Wright was born in Spain of a flamenco dancer/singer mother and an oil company executive father. The second of four children, she moved with her family to Scotland at the age of 6, when she learned English. The oil business took the family to Norway for several years when she was about 11, then brought them back. As with a number of artists, Wright’s interest in the field was always with her. A strain of the artistic runs through her family. Although her mother’s talents lie more with music, a paternal aunt was a painter, and another relative in Spain created religious art for churches. Her father was interested in gem art, upon occasion working in stonecutting and jewelry design. Older brother Jay was involved in furniture design at one point.

Wright has passed this passion along to her two daughters. Dominque, a student at the University of Colorado, Colorado Springs, is adept at graphic design and created the gallery’s Web site. Rebecca is an artist herself. In addition to the pieces Wright initiates because of her own inspiration, she frequently creates paintings on commission. These may be portraits, landscapes or abstracts for private collectors or corporations, based on a particular requirement such as theme, size or setting. A sister in Europe arranges showings in galleries farther afield.

PROCESS AND PRODUCT
Wright describes her works variously as impressionist, abstract and landscapes, but she doesn’t believe in categories or labels. “I do what feels right for me,” she says. ”I love color, I love abstract. I understand oil, so a lot of work is oil.” Oil blends a certain way, doesn’t dry as fast as acrylics and has its own feel. Much of her study originally was in oil, so it falls within her comfort zone. But she also works in pastels, watercolor, acrylics, metal and wood. “All my paintings are a solid,” she points out. She doesn’t use other media to build up texture. For example, a painting with a tree boasts a thick trunk, nearly a bas-relief. Trees are a popular subject and sell well. “I love the texture and building it up with oil,” she says. Another love is landscapes, frequently imaginary, bridging the categories of impressionist and abstract. So a landscape or a seascape may be born in the memory of a physical place, pass through her imagination, undergo additions and subtractions and take shape as a discrete, unique work. Wright usually has six or eight pieces going at once, at different stages of development. She works without preliminary studies or sketches. Inspiration is continually with her, and she jots down ideas for upcoming series. “Whatever I feel in the mood to paint is what I do,” she says.

PORTRAIT OF THE ARTIST AS A YOUNG WOMAN
Although Wright began drawing as a very young child, the move to Scotland brought her in contact with artist George Douglas of Aberdeen, who spotted the young Carla sketching in a park and stopped to look at her work. He liked what she was doing, walked her home and talked to her father about permitting her to study with him. From this coincidental and fortunate meeting sprang a mentorship between the older landscapist and the student. “He became part of the family,” a substitute grandfather, says Wright. The relationship lasted until Douglas passed away and Wright married at age 19 and moved to the United States. Douglas was primarily an impressionist in his approach. He expanded her vision and experience far past the pencil and graphite she’d been working with, teaching her about colors, connecting her with his associates who had diverse interests — including impressionist and abstract art — still reflected in her art today. With Douglas’ old school approach to teaching, Wright says she served as an apprentice, which included performing tasks as well as instruction. The knowledge she gained couldn’t have been gained in a formal college setting, she maintains. “I pretty much did what he said,” she explains. No paint in tubes. She learned to grind up pigments, mix with linseed oil, stretch canvases to prepare them for use, clean brushes. Whatever was needed. Instruction wasn’t limited to grunt work and practicalities.

Wright accompanied Douglas to locations out-of-doors to experience firsthand the translation between the physical world and the artistic vision. In a field, he might ask, “What do you see?” and she would respond. Even at this early point in her development, she provided her own imagination and interpretation. The field might not have flowers or vivid color, but she added and exaggerated. Douglas didn’t demand that she follow his lead. “He was teaching technique,” she explains. “He liked my expressions.” With strong management from her father, who studied how to sell art, she began to show in galleries at the age of 15. Her father, an art collector, “was pretty savvy,” she says. When the opportunity came for her to attend Gray’s School of Art in Aberdeen, her father advised against the move. “You’ll make a mistake if you quit now,” he said. So Wright pursued her personal course. She couldn’t see herself doing anything other than painting.

VOYAGES CONTINUE
At 19, Wright married American Eldon Wright (not an artist but a collector and avid supporter of Carla’s career) and moved to the United States in 1987. Their destination was Durango, Colo., and 100 acres of land. Culture shock set in, and the contrast between an urban life in a walkable city and a rural life, where a car is required to reach any and every amenity or acquaintance, floored her. Motherhood also had an impact on her ability to concentrate on art, which took a back burner for some time. She didn’t abandon it completely, however, for she designed furniture for brother Jay, who also relocated to the area and opened a furniture company. In addition, Wright taught art in the public schools and organized art auctions to raise funds for the schools. In 2002, she moved to Albuquerque for several years, then on to Colorado Springs, where she still lives. This was the point when she decided to open her own gallery and researched possible locations.

In 2006, the Carla Wright Gallery opened. Denver had more art galleries than Colorado Springs, which gave it an edge. Then the vibrancy of the Santa Fe Art District and the excitement of First Friday Art Walk helped her determine where to establish herself. As Wright said in another interview: “Personally, I did the art walk one First Friday before I bought the building. Both the energy of the event and the up-and-coming location sealed the deal for me.”

GALLERY LIKE A FAMILY
Denver’s ArtDistrict on Santa Fe (its official moniker), an official art and cultural district with over 40 galleries, restaurants and shops located just south of downtown Denver between 5th and 12th Avenues, is filled with contemporary, emerging and traditional art. An extremely popular activity in recent years, for both art novices and avid collectors, has been the First Friday Art Walk. Wright welcomes the crowds that visit during these events. While some (artists, gallery owners, and the public alike) may have become disenchanted with the burgeoning crowds, Wright relishes them because she gets to meet lots of people. For her the event’s purpose isn’t to make sales, which happen on subsequent days, but to mix and mingle. She describes the gallery artists as a little family unit.

A list of regulars includes Bill Gian, Marcus Harris, Tate Hamilton, David Shelton, Sybille Lilientha, Linda Armantrout, Danny Vasquez and Khale Mitchum, each of whom has an individual style. She credits Gian especially as an influence, both artistically and as a motivator. “He puts a smile on my face,” she says. In making decisions about adding an artist, the person’s medium and style are most important, but marketability also receives a nod.

Wright may be the only gallery owner not to be dismayed about the current economy. She predicts continuing growth in visual arts and the district itself. As proof of her belief, in addition to owning the building in which her gallery is located, she’s purchased a building on adjacent Inca Street, to be used for studios.

See more about Carla Wright and her gallery at www.carlawrightgallery.com.