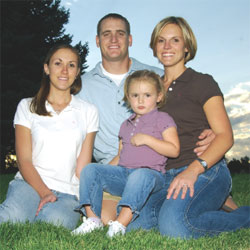 Coach, Mentor, Well-Balanced Woman: Tara Hall models keeping priorities on track. Coaching is at the core of Tara Elizabeth Hall, a balanced young woman who manages a family, a career and commitments to the communities where she is engaged. Teaching kids to swim was Hall’s formative coaching experience, and that experience was to become a defining part of who she is. In the years since she first began instructing swimmers, she has expanded her skills and developed her philosophy of mentoring to include the business world. Today, Tara Hall is a mentor for new business associates who are interning at the company where she works. This dynamic young woman of 26 models the values of a balanced life, a life where family, work and community activities and sports are each given intentional focus. “I have tried and tried again to separate the proverbial hats that I wear at different times of the day … only to realize that who I am is made up of all those different hats. Wife, mother, financial representative, coach, friend, sister, daughter … it’s all me, all the time,” Hall says. When she isn’t at the office or at the pool, Hall is enjoying her relationships with her husband and daughter. “My husband, Dean, and I just celebrated our fourth wedding anniversary this August. We met in 2001
three short months before he was scheduled to leave for a year in Antarctica as a firefighter. Still madly in love when he returned in 2002, we were married at the church where he grew up, with 200 of our closest family and friends giving us their blessing,” she recalls.

For 22 of Hall’s 26 years, she has been involved with the Cherry Creek Vista Vikings swim team. It is a summer league recreational team in the neighborhood where she, her brother and sister grew up. After 11 years as a swimmer, Tara Hall was given the opportunity to coach. Now, 11 years later, the team has grown from 67 swimmers to 207 swimmers who are ages 4 to 18. Tara Hall“Their smiles keep me coming back year after year. The impact I was able to have on children — from helping them overcome the fear of putting their faces in the water, to making it across the 25-meter pool, only to find he or she earned a blue ribbon for the first time —- is rewarding in so many ways,” she says. “The confidence that is built, their ability to start to really believe in themselves, makes each of the 207 swimmers near and dear to my heart. My very favorite (mentoring) thing is being a swim coach. We do have a ton of fun each summer,” she comments. Though she had been swimming since the age of 4, Hall’s swim coach career began 10 years ago, when she was 16. She added to her coaching re¢sume¢ by taking on the Douglas County High School girls’ and boys’ swim teams as an assistant coach. She also assists at Inverness Athletic Club, where she coaches the Colorado Athletic Club Stingrays. Hall doesn’t tire of coaching. It seems to energize her and gives her pleasure as the young swimmers succeed and learn good health habits.

Finding positives seems to come naturally to the fair-haired Hall, as does maintaining an even keel. “Dealing with parents can be hard, but it’s also rewarding. I sometimes have to tell parents their kid isn’t the fastest, and it’s difficult to do that. But I do believe in recognition, and I work with that in my coaching. I know about recognition because I wasn’t the fastest swimmer. I am a much better coach than a swimmer,” she explains. Her seemingly innate ability to work with others led to Hall’s being named a college unit director with Northwestern Mutual, the organization where she is employed as a financial representative. Being named a director “allows me to focus on what the interns are really good at,” Hall says. “I might tell someone he or she is really good at listening and at asking courageous questions,” is how she describes the process of working with an intern. Learning how to ask courageous questions and have courageous conversations is key to one’s skill development in working as a financial representative.

Hall takes what she believes are excellent skills at giving feedback and coaches interns to use those skills in working with potential clients. In getting to know the interns on a personal basis, she asks questions about their families, their goals, what they are passionate about. She can then use that information to help interns learn how to meet their professional objectives. Tara HallLeading and learning go hand in hand for Hall, who has been tapped to head a marketing program for Olivia, a program for lesbian women. As the only woman in the office where she works, she is the one “who gets to deal with all the female things.” She revels in this opportunity, in part because it allows her to coach the men in the office on the topics relating to women. “It’s been neat to see all the men in the office get involved, having courageous conversations. The men are learning how to listen better,” she asserts.

Listening is a major part of Hall’s balanced style. She has benefited from mentoring herself and understands what it takes to work with others in ways that are supportive and encouraging all at once. Hall has a mentor who is 65. They meet once a week, and it’s like Christmas, according to Hall: “He brings in books and tapes and quotes. I’ll never get through it all. One time he brought me a copy of the movie Parenthood cued up to the point where the grandmother talks about a person being on a roller coaster versus being on a carousel in life. That was a coaching point he wanted to make.”

Hall, in turn, takes books and tapes to her mentor and shares her point of view. As they share their thoughts, their mentoring relationship has taken a turn. “It was intended to be a business mentoring relationship, but it took on a whole different look based on who he is and who I am,” she says. “For me, there have two different kinds of mentors — one who was all business and the other kind who was more of a confidante, one who shares your struggles. You need someone to tell you the truth, someone who is willing to celebrate with you. You need both kinds of mentors,” believes the wise-beyond-her-years woman.
The philosophy that propels her to engage in courageous conversation and tell the truth won’t allow her to sidestep difficult situations with parents as she coaches their children.

Hall comments, “Tough times will surface when parents are disappointed their child won’t be racing in a relay. We try to be really diplomatic. Every year we do a handbook, and its purpose is to say this is how we decide who goes on a relay team.” One parent challenged her decision, so she decided to have a swim-off. “The kid I expected to win did win, and so it worked out just right. The kid who didn’t win said, ‘Cool, now I can go play baseball,’” Hall remembers. Now that Tara Hall is a mother, she understands what goes on with parents. “I know how parents must feel. Now that I have a child, I do understand better,” she says. “I do have great relationships with our families.” Having a daughter has been a delight for Hall and one that helps her keep her life’s work on target. She says, “Dean and I were blessed with our daughter, Avery Grace, one month before our first wedding anniversary. She is the light in my life, the sparkle in my eye and the reason I am so passionate about my career and the lives I can have the opportunity to impact each and every day.”

Hall says she detects her own shy disposition in Avery. “I grew up really shy, and my parents forced me to take lessons, to go to beauty pageants, to do other activities. Once I got to college, I sought those things out,” she says. She studied at Colorado State University in health and exercise science and is doing professional work now that is “a far cry from that.” She believes her career has happened for a reason. As the only female rep in her office, she is able to use the skills she thinks women have, such as nurturing, listening, building enduring relationships, doing teamwork and trusting. It has led to her working with the Susan G. Komen Foundation, the Colorado Women’s Chamber of Commerce and the Women’s Vision Foundation as well as CAMP Experience. She is involved in teaching kids the ins and outs of financial literacy, a program she also uses at church parenting classes.

Tara and Dean both enjoy parenting and their home. They all go on fishing trips, and while Dean is fly-fishing, Tara and Avery enjoy the outdoors. The family goes to movies and the swimming pool. “While he is swimming, I coach him,” Hall says with humor. When at home, the Halls rearrange their house, because “we love making things new. We also love to go look at model homes.” They help friends move as Dean has a big truck. They spend time at coffee shops and restaurants and with family. Blending all her skills, interests and passions is a natural for Hall. “I no longer try to separate my roles or change hats throughout the day,” says Hall. “I am always a wife, always a mother, always a financial rep, always a coach, regardless of whether it is my clients, my family, my college agents, my co-workers, my swimmers – as long as I am making a positive impact, I am being me.”