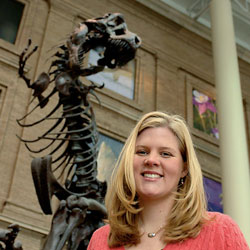 Rhodes Scholar will continue studies in sciences in England this fall. Elizabeth Mayne is enthusiastic about biophysics, Shakespeare and freestyle skiing. She swims, she acts, and she does lab research. As each of these interests takes her time, commitment and passion, she approaches them with a full-speedahead focus. Because of her extraordinary belief in the power of loving what she does, Denverite Elizabeth Mayne is an outstanding role model for young women.
Mayne, who has been named a Rhodes Scholar and will begin studies at Oxford University in England this fall, says she doesn’t have pithy comments about what makes her a role model. She doesn’t even think of herself as a model. “It’s more about doing what I love and have a passion for,” she says. Her reluctance to brag about herself is consistent with her understated demeanor. Mayne is modest about her successes and grateful for the many opportunities she’s had. She credits her family with their unfailing support. Yet Mayne’s attention to giving her work the best has propelled her to numerous honors. Last December she graduated from Stanford University with departmental honors in biological sciences and specialization in biochemistry and biophysics. While an undergraduate, she was a President’s Scholar at Stanford and a Howard Hughes Summer Fellow in the Stanford Department of BiologicalSciences. She was a Micron Science and Technology Scholarship recipient from 2001 to 2005.

And the 23-year-old’s list of accomplishments doesn’t end there. She has competed with the Stanford Triathlon Club, the Stanford Women’s Ultimate Frisbee B-Team and in national freestyle skiing. She ranked in the top 30 in the junior division of freestyle skiing. Elizabeth Mayne is a woman who does what she enjoys and enjoys what she does. She started freestyle skiing at the age of 14 at Winter Park. She recalls, “I was a total scaredy-cat when I was little. My mom and sister went with me the first day I did freestyle skiing, and they didn’t think I’d like it. I loved it. I discovered I have an inner adrenalin junkie and that I like throwing myself off hills.” Mayne gave up freestyle skiing competition when she started college, but she still enjoys seeing competition. For two years at Stanford, Mayne was a member of the Stanford Women’s Ultimate Frisbee B-Team. “It was fun and a great way to see California. The A team in Frisbee at Stanford is really serious; I was on the B team. You can’t just walk onto an athletic team at Stanford. They field really good teams. It was a good experience. Some of my friends in Frisbee are some of my best friends. We so enjoyed the time we had together and loved the competition, too,” she says.

Mayne also competed on a Stanford Triathlon Club team. She is training now for a sprint triathlon, which is a short-version triathlon she will do with her mother on June 19 at the Boulder Reservoir. They are participating with Team in Training, a nonprofit that raises money for the Leukemia & Lymphoma Society. Mayne says her entire family is athletic. Her sister plays tennis, and her father skis and plays golf. She skis when she can. She still swims and reads in her leisure hours. As a recreational activity away from her science studies and athletic competitions, Mayne volunteered with the Stanford Shakespeare Players. She was a company member and played Amelia in Othello and the roles of Swing and Servant in Romeo and Juliet. In the Swing role, she participated in a variety of crowd and group scenes. She was also an assistant set designer for As You Like It.

Mayne was an assistant director for Transform Shakespeare Outreach at Stanford, where she helped plan, develop and teach a student-initiated class on Shakespeare, Education and Outreach. She was responsible for helping Stanford students develop an abridged performance of A Midsummer Night’s Dream and a six-hour workshop on Shakespeare to present to local at-risk high school students in the winter of 2004. As part of her learning about Shakespeare, she did a Stanford Overseas Seminar on Shakespeare production. Dr. Lisa Van Bramer“Shakespeare and science are different. It’s nice to go off and think about Shakespeare for a while,” the multitalented Mayne says. The Denver Kent School grad began her studies at Stanford in astrophysics but says biology grabbed her attention. She goes on to say, “What got me into astrophysics was that you could explain how the world works. I was in a summer research program at Stanford. Students were coming in and telling me what they’re doing. One student talked about biophysics, and it sounded interesting. With structural biology, you take a protein, like DNA, and figure out what it looks like in three dimensions. In order to understand biology you need to understand physics. Science is fun to think about. How are all these little things in the universe working?”

As she talked, Mayne looked out at the tables in the room, where sunlight played on the surfaces of the coffee shop furniture. “I look out and see the tables over there and see the light, and it is aweinspiring to me,” she says. She believes that at some point certain aspects of biology will be understood from their molecular makeup. The idea of how the two sciences work together fascinates her, a woman who strives to know the interactions of objects and nature. The aspiring doctor received a Howard Hughes Summer Research Fellowship in 2004 to perform research for her honors thesis in the Department of Biological Sciences. She continued that research with an honors fellowship in the Burkholder Lab at the Stanford Department of Biological Sciences, where she performed research on cell division and DNA.
Mayne explains that when a cell divides, it must maintain the fidelity of its genome (its DNA). To ensure that cells do not divide inappropriately, cells have mechanisms for sending the status of their DNA. If the elements of the cell machinery find the genome intact, the cell gets a green light to divide. She goes on to say, “I studied how one of these regulatory pathways functions before and after a certain type of division (asymmetric division during sporulation) in a bacterium called Bacillus subtilis.”

Mayne says women have done a good job of penetrating the physical sciences. About half the students in the Stanford biology program are women, she estimates. She hopes to go into academic medicine, which would allow her to teach in a university hospital system or do research in an academic setting. Her studies will include work toward both a medical degree and a Ph.D. She’ll need both to work in an academic research capacity. If she goes into academic research, she will be in a smaller circle of women who pursue that as a career. Mayne will leave for England in September to begin her Rhodes experience, which will find her working in a molecular oncology lab. She will finish with a degree and then plans to begin medical school. Currently in the thick of applying to medical schools, Mayne is looking on both coasts and at the University of Colorado. A January-February trip took her for three weeks to the East Coast, then to the West Coast, all in search of medical schools to which she will apply. “It occupies a lot of my time,” she says.

Mayne finds the new Fitzsimmons campus in Denver amazing. “I think it’s a really good place to be. A lot of exciting developments are taking place there,” she says. “But wherever I go to medical school or for residency, I want to come back to Colorado. I love Colorado.” While in Denver for the winter, Mayne spent time with family and socialized with friends who’d moved back to the area. When she comes to Colorado between academic stints, she joins her parents and sister, as well as her extended family. Mayne returns to a city where she gained an interest in both science and volunteering at a young age. She started giving her time at the Denver Museum of Nature and Science in 1997 and volunteered there every summer until she graduated from high school. “It was a really rewarding time and a lot of fun. You were talking with people and teaching about interesting things,” she says. Dr. Lisa Van BramerWhile at the museum, Mayne worked in the experiment gallery and the space gallery and became a team leader for Ask a Real Scientist. In 2000 she served as an intern with the Space Science Initiative, where she planned and coordinated a presentation and press release for the museum’s new space science exhibit. As a team leader with the Planetarium Teens, she coordinated and performed space science demonstrations and presentations in planetarium and was responsible for directing teen planetarium volunteers.

During her volunteer work at the museum, she was asked to join the Denver Mayor’s Commission on Youth. She served as co-chair in 1999-2001. “We’d have a forum of school board candidates, and we’d ask questions of the candidates. We developed a workshop on tolerance. We presented a workshop on safe sex and did that in conjunction with Planned Parenthood. It was great for youth, because a lot of times you can feel the issues of youth aren’t being addressed,” she comments. When asked about her opinion of herself as a role model, Mayne is reluctant. She explains, “I do what I do because I love it. I feel like the term role model implies awe-inspiring. I’ve been fortunate to be interested in what I’m doing. What I’ve learned is there will always be people telling you that you can’t do this or can’t do that. But it’s really important not to pay attention to people who tell you that you can’t do something. It’s really important to have longterm goals and to go for them.” 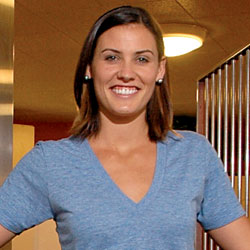 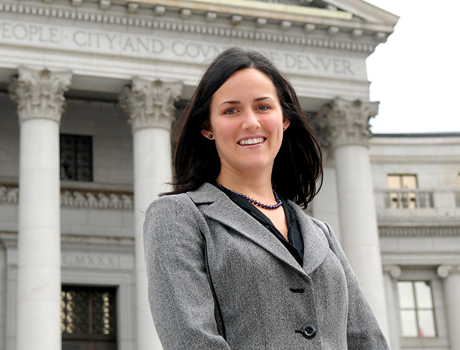 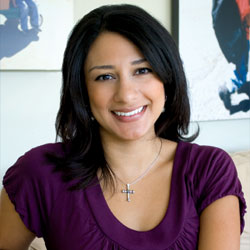 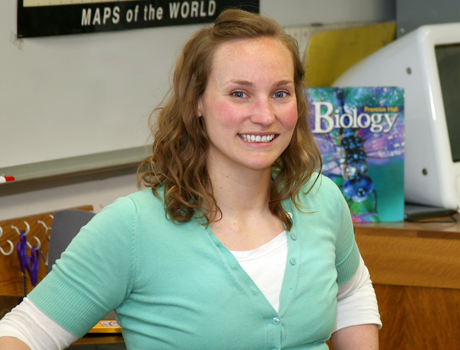