The Pleasures of DownTown Living 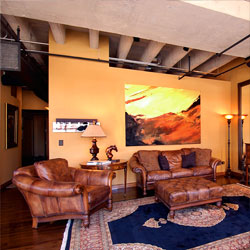 The Baker/Courdeaux loft boasts engaging views, proximity to city attractions. It’s mid-afternoon on a Friday, and we’re standing on the deck enjoying an unusual Rocky Mountain warm spell. The Drifters’ Up on a Roof is coming in loud and clear from the outdoor speaker. To be honest, we’re not on the roof. We’re on the second floor balcony overlooking the corner of 14th and Arapahoe in downtown Denver. Mark Baker and Priscilla Courdeaux are at home in their city loft. They’ve both done the family thing, living in suburbia. They say, “We love being right over the street. In the summer, we just prop our door open. There are drinks and food out here. It’s happy hour! We don’t even have to go to a bar.” And, as Baker says, with their three kids grown, 1,700 square feet is plenty of room for them. “For us, it’s just our house, so we do the same things you do in your house. We’re just able to look out and see things going on all the time. The windows and the doors are extraordinary. You see the cars and the buses go by, but you don’t hear ‘em!” he exclaims. Baker and Courdeaux moved into their place a year ago. At one time, it was a realtor’s office. But the cubicles and hallway mazes have been converted to a living space. Today, the Baker/Courdeaux loft has floor-to-ceiling wrap-around windows with northern downtown views from the living room and kitchen. It exemplifies city chic. The 14-foot ceilings are exposed, lending an urban feel as concrete beams, heating vents and pipes snake above your head in every room.

In contrast, the walls are elegantly finished in a warm gold, giving it a finished look. A tall chandelier sparkles over the distressed wood dining table. “It’s leather and lace. I wanted this to be like a New York brownstone with dark woods, and I partnered it with a rustic Colorado look,” explains Courdeaux, who is an interior designer for Howard Lorton galleries. It’s a convenient job for someone who not only loves beautifying other people’s homes, but also considers her own living space a work in progress. She loves handpicking almost all of her furniture from the “office” where she goes to work every day. It’s a place she feels she belongs, as Lorton’s is one of the only family-owned furniture retailers still standing in Denver. Howard Lorton himself started the business in 1927 with a grand idea. He wanted to introduce beautiful furniture from all over the world to Denver, which really was a cow town. athome picToday, his grandson, great-grandson and great-granddaughter, Cathy Cook Hitch, are still in charge. Hitch pulls astonishing double duty: She is in charge of marketing for Lorton’s, and she’s also an Episcopal priest. The job at the church isn’t affected as much by the poor economy as the furniture biz. “We’re definitely slower. But sometimes in a down year, people buy furniture instead of going on vacation. They bring Europe home to them,” she says.

The Baker/Courdeaux loft resembles a mini-Howard Lorton’s showroom. One of the couple’s favorite pieces is a side sofa table from the Althorp Living History Collection signed on an inside drawer in black felt-tip pen by Princess Diana’s brother, Earl Charles Spencer. Althorp is a project of Spencer’s. He licensed 500-year-old furniture in his home to be reproduced and sold around the world and comes to Lorton’s once a year to sign his furniture. Another notable piece of furniture sits in Baker’s office. It’s a high-backed desk chair on wheels, which is a replica of the one President Bill Clinton had in the Oval Office. Baker jokes, “It’s the same one he used. Only his had a presidential seal on the back.” On the walls above the desk hang two framed oils of golfers, a gift from Courdeaux, because she knows her husband would rather be on the links than just about anywhere else. They incorporated another passion of theirs into the home: wine. With such a small space in the loft and no cellar, Baker knocked out some walls to fashion a room for his wine and champagne collection. “You have to have wine,” says Courdeaux, running her hand over the door like Carol Merrill. “How do you live in downtown Denver without wine?” The wine room is in the hall and has a glass door, so when you walk by, you can see row upon row of bottles stacked on top of each other. It’s basically a closet with a refrigeration unit built above it to keep the temperature at 55°. She laughs about the day her husband “created” it. “I came home from work one day, and Mark had turned the closet all around. He cut the door with a saw,” she recalls.

Besides the wine room, the Baker-Courdeaux unit has a master bedroom, a second bedroom/office, two full bathrooms, a kitchen, living room and the deck. The laundry room is down an outside hall, and they’ve turned their storage space, also down the outside hallway, into their workout room. They exercise watching a wall-mounted HD TV surrounded by paint cans and boxes. A large Merry Christmas wall hanging leans against a chain-link fence. “It works for us. When we need to get away, we just come back here and sweat away!” they say. Parking is provided in a garage underneath the building. at home picCity living means adapting and using space efficiently. Walnut-stained oak floors and dark woods exude a warm, welcoming feeling. There are no secret nooks or crannies. On one side of the state-of-the-art kitchen there is a view to the living room, and the other faces out onto the deck.  Distressed black cabinets and gold and black granite countertops match the colors Courdeaux has chosen: Rugs and upholstery feature ebonies highlighted with persimmon, sage, sea green and mustard. Much of the furniture, like the couple’s large sleigh bed, is bold, she reasons, because “in a small area like this, you have to think big for the furniture. It balances things out and makes the space seem not so small.” Also in a corner of the master bedroom is one of two pieces that was not a Howard Lorton purchase: a wonderfully intact turn-of-the-century vanity. It was a present from her husband: “Mark noticed I was standing up to put on my makeup. He said ‘I don’t want for you to have to stand up to do that.’ So he bought me this piece from an antique store on Broadway. Every morning, I do my makeup here, and he brings me a cup of coffee.”

The couple brought each of their talents to the table when fashioning their downtown home. Courdeaux says when they first toured the space, it took her only two minutes to envision how she would change it. “It was kind of plain,” she says. “Lots of white plaster.” She raised the ceilings, moved doors, knocked out walls and built new ones in their place. When her husband found three huge old mirrors in the trash, she had a brainstorm. Though most of the living room is surrounded by glass, one wall was bare. Those dumpster mirrors would fit perfectly to fill that wall. Courdeaux comments, “I thought, I’m not going to find an art piece as important as what goes on outside, so I did mirrors to reflect everything that’s happening downtown through the window. You should see it at night. The lights of the skyscrapers twinkle in the reflection!” She had a carpenter fashion ornate wood molding to replace the ordinary gold frame around the mirrors and match it to the adjacent fireplace mantel. “I wanted this to be very dramatic,” she says.

Baker marvels at his wife’s creativity, but he has his own contribution to their city space: He’s a gadget freak. His pride and joy is an up-to-the-minute Bang and Olufsen sound system. It originates from his office computer, hooks up to speakers all over the home and links to their television. On their TV a continuous music video plays, corresponding with the music flowing through the speakers overhead. The image on the television can be interspersed with family pictures that drift across the screen. at home picThe Baker/Courdeaux city loft is the third home they’ve redecorated together during their four-year marriage. “Mark’s very technical, so the things I don’t know, he does. I see things from an aesthetic point of view. We just bring it together,” says Courdeaux. The couple loves living downtown. Their loft is built directly over a French restaurant, the Convention Center is just blocks away, and the Denver Center Theatre Complex is around the corner. There are 80 acres of parks and open space for them to enjoy should they ever feel downtown Denver pressing in on them. Says Courdeaux, “Think about it. This is the heart. Everything is right here. When we go out, everyone knows us. They all say ‘hi’.”

She can’t wait to celebrate the end of winter by hanging pots of flowers on the deck for color — a little piece of nature floating above the rush of a city backdrop.

When you’re living the second half of your life, downtown provides the perfect adventure. 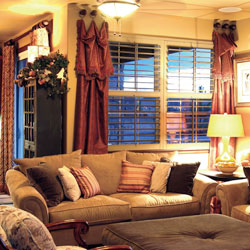 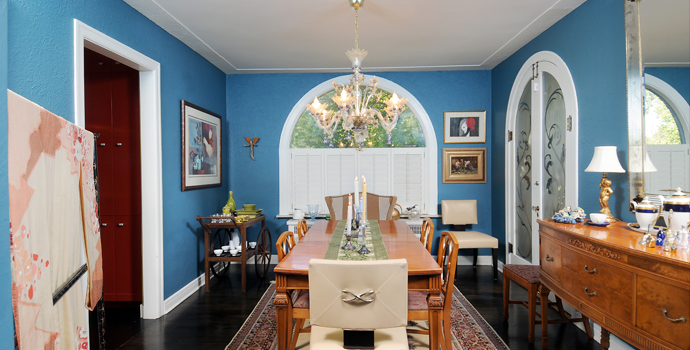