Family Issues: When Death is Imminent 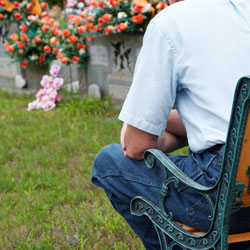 What to expect, how to deal with it. When I was asked to consider writing about this topic in November, I returned the e-mail saying I think it’s too close to home because I have two family members in my household who are on hospice right now. Then, before my editor had a chance to respond, I sent another e-mail accepting the assignment. I told her I thought it would help me go through what I was facing. I’m writing today about my mother, Opal Mary Campbell Schmitz, and her dying process. By the way, working on this article has helped me work through my mother’s death. I did my research, revisiting Dr. Elisabeth Kübler-Ross and reviewing the five stages of dying. In her 1969 book, On Death and Dying, she outlined these five stages. She warned against taking them too rigidly and she wrote extensively, in this book and others, about our society (and even the medical community) having difficulty with death. She also said the stages don’t necessarily come in order.

One Sunday in June, Mother, who had been fighting lung congestion, took a sudden turn for the worse. When I called her doctor, he said, “Take her to the emergency room. She probably needs to be hospitalized.” I talked to her, and she said she didn’t want to go. I called back, and he said we could call in hospice. He would certify her as qualifying for that service. We chose that option. The nurse came out that day and enrolled her in the service. It was certainly a positive step for us. We never regretted the choice. The hospice personnel provided palliative treatment — treatment to keep her comfortable. Cure was not possible, and we all knew that. Mother immediately signed a DNR (Do Not Resuscitate) order. She did not want artificial means used to sustain life, either. As I write, my eyes frequently fill with tears. Yet dying, to quote a trite phrase, is indeed a part of life, and as Mother was to say later, “It’s something we all have to go through.”

KÜBLER-ROSS STAGES FOLLOW:
Denial and isolation. Although Mother foreshadowed her death with several sayings such as “I see the handwriting on the wall” and “I’ve stayed too long at the fair,” she also wrote in a note to my cousin, “I’m on hospice now. That’s supposed to mean six months or less to live. I plan to fool them all.” Technically, when hospice comes in, a doctor is saying death is imminent, in six months or so. In truth, no one can predict when death will come. And when a person is 97 years old, as my mother was, she or he can decline very rapidly. Our hospice nurse told us they have several people who have been on the service for two years or more. We, too, hoped Mother would “fool them all.”

Kübler-Ross warns against breaking through the denial. Denial is a protective mechanism. The patient will face the death in her/his own time, or not. It isn’t up to us to make him or her face it. It is important to be truthful about the seriousness of the illness and to allow for hope.Along with denial goes isolation. The patient begins to sleep a lot and lack energy for long visits in person or on the telephone. Kübler-Ross uses the term decathexis to describe a disconnecting from the outside world as the person prepares to leave it. Often s/he will choose one person to rely upon for comfort and solace. Mother was mobile to the end. She quit coming out into the main house months before she died. It was partly because she was so weak — she couldn’t make herself eat and was losing weight rapidly. She weighed 65 pounds the last time we weighed her. Al, Mother’s husband of 42 years, was with her and caring for her the best he knew how, and I became the one she relied upon for comfort and solace. Al is 95 years old, blind and nearly deaf. As she grew more and more frail, Mother’s voice grew weaker, and she couldn’t make him hear her. She couldn’t ask for comfort from him because she couldn’t get his attention. I paid attention to her facial expressions and soft moans and responded with touch and holding. I continued with my normal work schedule and canceled appointments when there were crises. My daughter, Beverly, was there providing comfort, as well, throughout the day while I worked.

Anger. Mother did not directly express her anger. I suspect she felt it because she seemed to be projecting it onto Al. She thought he was angry with her. I know he wasn’t; he was devastated as he watched her “wasting away.” Most people do own feelings of anger. Sometimes they express anger at family members, sometimes at the medical community who are caring for them and sometimes at God.

Depression. Mother was depressed much of the time those last few months. She talked about the lack of quality in her life. She had long since quit reading, and in the last weeks, she quit listening to her audio books. She worried about leaving Al. How could he make it without her? And she hated that she was such a “burden” to us.

Bargaining. Mother’s sister, my Aunt Ruth, went with her family on a Christmas cruise. They were gone from the 17th to the 29th. My brother, Dean, arrived Christmas Eve, and he and I were with Mother most of the night. She had a very bad night. The hospice triage nurse came out to help early Christmas morning, and it was obvious to us that Mother’s condition was very serious indeed.

I began using the emergency contact number my cousin had left me to try to reach my aunt. They were unavailable until Monday night because of the ship’s location. When I talked to my cousin on Monday evening, we arranged for Ruth to call the next morning. When they talked, she asked Mother to “hang in there” until Thursday, when they would be landing. I believe Mother did her best to bargain for that extra time. And, finally, acceptance. About a week before her death, Mother told me about her friend Alma’s death. She said Alma’s husband gave her a dose of medicine and went into the kitchen. When he came back, she was gone. I understood she was letting me know that she knew her own death was imminent. I asked if she was afraid. She answered, “A little, but everyone has to go through this some time.”

I went to work Wednesday morning, not aware how close we were to the end. She was on continuous care with hospice by then, and Dean, Beverly and Al were in the house. Beverly called me at the office around 6:30 p.m. and said through her tears, “Granny just quit breathing.” Hospice provides a little booklet for the families of their patients, Gone From My Sight: The Dying Experience, by Barbara Karnes, R.N. While writing about signs that death is approaching, Karnes stresses that “Death comes in its own time; in its own way. Death is as unique as the individual who is experiencing it.”

FOR THE LAST THREE MONTHS:
Withdrawal. She states that when approaching death, people begin to withdraw from the media, friends and family, even those most loved, and begin to go inside, “sorting out, evaluating one’s self and one’s life.” Increased sleep or at least increased time with eyes closed is part of this period. Mother for years took an afternoon nap, and then she added a morning nap. Frequently, as she sat in her chair, her eyes were closed and her head was nodding. Food. Karnes writes, “When a body is preparing to die, it is perfectly natural that eating should stop. This is one of the hardest concepts for a family to accept.” Mother knew she needed to eat in order to live. She tried to think of things she wanted to eat. Then she would eat one or two bites, and she would feel too full. It was hard to watch. Karnes writes, “It’s OK not to eat. A different kind of energy is needed now. A spiritual energy, not a physical one, will sustain from here on.”

Karnes offers a summary of the guidelines to approaching death. It follows:

One to three months: withdrawal from the world and people, decreased food intake, increase in sleep, going inside of self, less communication.

Days or hours: intensification of one- to two-week signs: surge of energy, decrease in blood pressure, eyes glassy, tearing or half open, irregular breathing, stop/start, restlessness or no activity, purplish knees, feet, hands, blotchy, pulse weak and hard to find, decreased urine output, may wet or soil the bed.

Minutes: “Fish out of water” breathing, cannot be awakened.